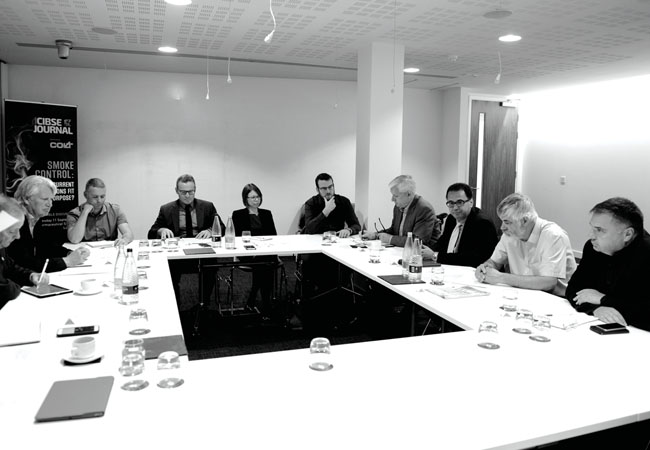 The golden thread must run through all building projects to ensure the original fire and smoke-control strategy is preserved throughout the life of the building.

This was the standout message from CIBSE Journal’s roundtable on smoke control sponsored by Colt and held at the Royal Pharmaceutical Society in September.

The roundtable debated some of the key recommendations in Dame Judith Hackitt’s Independent Review of Building Regulations and Fire Safety in light of the Grenfell fire, including the creation of rigorous dutyholder roles and responsibilities to ensure a stronger focus on safety during design, construction and refurbishment. Another consideration was getting competent people who understand their responsibilities to maintain safety throughout the lifecycle of a building.

The fire engineer responsible for the life-safety system design has to see it through to the end, said Ian Doncaster, fire and smoke solutions director at the Smoke Control Association.

Fire engineers are commissioned to write a fire strategy ‘to get a tick in the box for building control, and they are never seen again’, added Nick Troth, chartered fire engineer and associate director at Arup. ‘You never know if a contractor has read it, let alone the sub-contractors who are meant to be installing the systems.’

Dr Ahmed Allam, director at Cundall Fire Engineering, said the fire strategy must be part of the holistic construction process because it interrelates with other disciplines, including structures, architecture and mechanical, electrical and plumbing (MEP).

‘For years, the fire engineer has been pushed down the ladder in the design process, but their work should fit into the bigger picture so everyone [in the project team] has a chance to look at – and criticise – it,’ he said. He added that the fire strategy needs to be a living document throughout the lifecycle of a building, addressing the methods and the building’s operational requirements. ‘I insist the fire engineer reviews the MEP, referencing the fire strategy, before it’s issued to the contractor. We have to tie it together so we can get the construction lined up with the philosophy of the building’s fire safety.’

Conor Logan, technical director at Colt, said the fire-safety strategy is usually given to an M&E engineer, who writes the specification.

Troth said Arup’s philosophy is to check the principles of the fire strategy have been met at RIBA Stage 2, for example, and signed off. This, he said, is in line with Dame Judith Hackitt’s third ‘gateway point’, proposed in her final report into her review of Building Regulations and fire safety. At gateway three – handover – the Joint Competent Authority must be satisfied that the signed-off design has been followed before occupation can start.

Dr Hywel Davies, technical director at CIBSE, said gateway three should involve the fire strategy’s author returning to ensure it has been implemented and installed accordingly, commissioned and tested competently, and delivers what the strategy says.

‘That’s the issue of the golden thread – it’s the continuation of communication of the various stages to ensure the fire strategy philosophy goes all the way through,’ said Troth.

The principal engineer
Eleven Working Groups have been set up by the industry-led competency review established in the aftermath of the Grenfell fire to consider competence requirements across the industry.
The working group on engineering competence has proposed the recognition of the role of principal engineer to provide an interface between all building systems throughout design, procurement, installation, commissioning and testing.
George Adams, engineering director at Spie UK and chair of the engineering working group, says this was particularly important for refurbishment projects, where systems are more likely to be procured separately leading to the risk of poor integration.

Under current regulations, the principal designer – who might be an interior designer or architect – is responsible for the project. However, they may not have the necessary technical knowledge to ensure the design and installation are completed as per the fire strategy.

‘Somebody needs the responsibility of making sure, from a holistic point of view, that all technical systems that contribute to life safety and the safety of fighting a fire will work and do the job they’re supposed to do,’ said Adams. ‘That’s why, through the Hackitt report and the response to it, we are proposing the role of the principal engineer, who can inform the client of the skill and competencies needed on that project.’

Competency
David Quinn, group director, fire engineering, at BuroHappold Engineering, agrees with the concept of a principal engineer but says they would be relying on the competencies of those approving systems. ‘Ultimately, it comes down to one person signing off an entire raft of design installations, commissions and testing, and they’re not necessarily competent to do that, so they have to rely on other people’s competencies. The project relies on the golden thread of competency, not just the golden thread of information,’ he said.

Quinn said a stronger regulatory framework was required to empower fire engineers to drive the right outcomes from a project. ‘We need clear guidance that is unequivocal that you need a competent person to drive a project right from the start to the end.’

Perhaps the client has to be legally responsible for demonstrating how they will employ competency, not only in design and construction, but in operation too, and show how that can be transferred if building ownership changes, said Adams.
In response to Dame Judith Hackitt’s review, the Smoke Control Association has launched a certification scheme for contractors. The IFC-run scheme was developed to deliver competency in fire strategy verification, system design and the installation of smoke-control systems, as well as service and maintenance work, said Doncaster.

‘The SCA-accreditation scheme would check if a company is applying and abiding by the regulations, and using the right products that are correctly installed by competent installers and commissioned thoroughly with functional testing,’ said Doncaster, adding that three firms are currently being accredited, and another four are in the queue.

‘As engineering bodies, we have a process for overseeing the registration and training of competent engineers, who have to abide by a code of conduct. As professional engineers, we also have a moral responsibility that goes beyond our technical responsibilities,’ he said.

He said smoke control needed to become a specific stage in the RIBA process, so it could not be ignored. ‘Smoke-ventilation systems need to be designed into a building, not added to it,’ he said, and this will only happen if a smoke-ventilation specialist is employed at an early enough stage. He added that a melding of disciplines, including fire engineers, mechanical services engineers and smoke control specialists, would make the system appropriate. ‘A lot of competent fire engineers are not competent at designing smoke-ventilation systems because their specialism is a branch of fire engineering that is not cross-disciplinary, and smoke ventilation is a multi-disciplinary subject,’ he said.

At Davies’ call for a fire-engineering overlay to the RIBA Plan of Work, Adams said a fire-safety overlay – looking at the coordination of life-safety systems in high-rise buildings – had been proposed by his working group.

Troth also suggested the smoke-control industry adopts some form of registration scheme, potentially through CIBSE, to ensure a specific qualification is created for smoke control engineers to prove their competency. ‘A registration scheme would give me some degree of confidence that it’s an appropriate design.’

Maintenance and testing
Maintenance of building systems is often an afterthought, said Doncaster. ‘We need to promote maintenance of smoke ventilation systems as a recognised specialist activity because, commonly, it becomes something that the fire alarm guy does.’
He said facilities managers are competent, but they’re not specialists at checking life-safety systems; they won’t take measurements or airflows and, if they did, they wouldn’t necessarily know if they were relevant or whether they matched the original design intent.

Logan said in some European countries, it is mandatory for the installer to maintain the systems or to nominate a third party to maintain them.
But the Building Regulations, administered by Building Control, do not have any continuing powers, said Troth. ‘Beyond the checking process at commissioning, how do you ensure that the end user or responsible person – who can change multiple times – is maintaining and testing systems properly?’

The Fire Safety Order puts the onus on the responsible person to maintain the fire safety systems in the building – but this is not being enforced, he said.

‘But that level of scrutiny is not going on throughout the lifecycle of the building – there is a loss of information over time,’ said Roger Harrison, technical director, fire safety, at BRE Global.

Davies said regulation 38 – the requirement to hand over fire safety information – has been found unfit for purpose because it is not possible in law to bring someone to account for failure to deliver that information. ‘That has got to change,’ he said.
Hallam questioned to what level smoke-control systems could be maintained. ‘Sometimes, smoke-control systems are too complex because we’re asking them to do a lot more than keeping the stair clear, like cool corridors. There are so many permutations of dampers being open or shut, for example, that it becomes really difficult to make sure these things are working.’

The simplest designs are often best, agreed Doncaster, but added that complex buildings sometimes need complex systems. ‘With these, we have to take on board the additional responsibilities to make them safe and maintainable,’ he said.
Davies suggested creating an annual building check with some form of regulated prescription, similar to a yearly MOT for cars.

Doncaster agreed, and said remote monitoring technology could present an opportunity for the industry, as long as it does not dilute the maintenance procedure. ‘If you don’t know the fault exists, you can’t do anything about it. Monitoring gives the opportunity to identify the fault early, but you still have to have competent maintenance people to look at the issue and get it fixed quickly,’ he said.

Throughout the debate, members of the roundtable were of one mind: fire and smoke control is a specialism, and should be recognised as such. The golden thread of this strategy must be preserved throughout concept, design, commissioning, maintenance and testing, and overseen by a competent engineer, with input from the fire specialist.

‘Putting aside our exit from the EU, this has the potential to be one of the most significant topics in parliament for a while,’ said Davies. ‘We must do anything we can to help the government understand what’s needed and why. We have to help them understand what clever regulatory change could look like.’