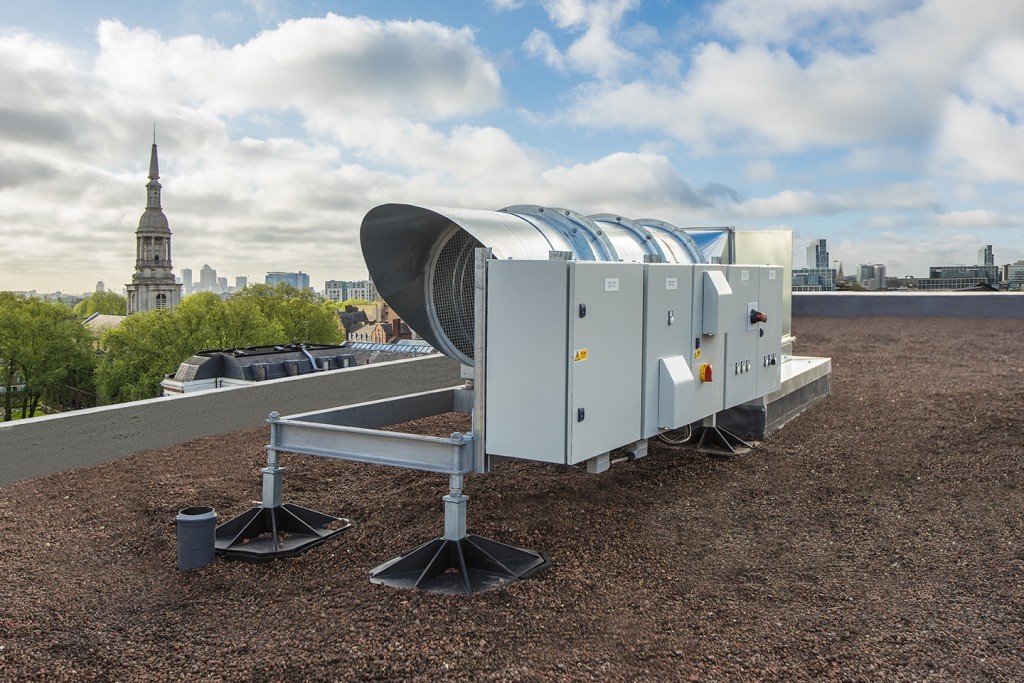 The current lack of definitive guidance for auditing mechanical smoke extraction designs in high-rise buildings means that their specification is often based on cost rather than verifiable information on their performance. Simon Plummer, national fire safety manager at FläktGroup, explains why more specific criteria for assessment, together with a standardised provision of these systems, will make it easier for building designers to specify the most suitable option.

Mechanical smoke shafts in high-rise buildings are common solutions for protecting escape routes and maintaining adequate conditions for firefighter access during an emergency. They are particularly well suited to areas with space constraints or architectural restrictions, as they take up much less room than systems that use natural ventilation.

That said, many specifiers and developers are still very much in the dark about how best to compare different solutions during the early stages of a project, despite their effectiveness and simplicity. This is largely down to the fact that mechanical smoke shafts do not yet appear in the Building Regulations and are instead treated as a fire safety 'engineered solution'. On the other hand, natural smoke shafts can be found in paragraph 2.26 of Approved Document B of the Building Regulations.1
This means that each design is treated as an entirely new scenario and judged using the relevant sections of a number of different documents. For instance, the Smoke Control Association's (SCA) 'Guidance on Smoke Control to Common Escape Routes in Apartment Buildings, contains some of the acceptance benchmarks for a mechanical ventilation smoke-shaft system; however, this only applies to residential developments, with no legislative counterpart for commercial or mixed-used premises.2

This lack of detail and specific legislation around the minimum performance standards that mechanical smoke extraction and ventilation have to meet means that the level of detail given by suppliers can vary greatly – all depending on the stage at which the project is at.

From the outset
In the early stages of design there tends to be very little available information other than perhaps a very general description of how the system would work. At tender phase, while a full bill of quantities will clarify what will be supplied, it is particularly difficult for suppliers and end users to compare and contrast the different options available, and ultimately judge which would be best at implementing the fire strategy in the absence of detailed technical standards to refer to.
In fact, the only clear benchmark upon which they can compare and make decisions is price. Obviously, this is far from the best method of selecting an option, as this doesn't ensure that the specified system will meet the criteria as outlined in the fire-safety strategy.

Specifiers who lack the in-depth knowledge of fire-safety systems have to rely on the supplier's information and promise of compliance with the regulations, the system's past performance, and reputation of their brand to make procurement decisions.

The only situation where a supplier would be required to provide additional detail on how the proposed system meets regulations would be when a report needs to be submitted to the local authority for building approval. This would occur either prior to handover or at practical completion – by then, a certain level of commitment would have been made to the supplier. Furthermore, due to the fact that each development is treated as a bespoke design, project-specific Computational Fluid Dynamics (CFD1 analysis is required in the report for Local Authority Building Control. This means that, unless the entire smoke extractions system is supplied by FläktGroup – which is authorised by LABC Approval - more complex steps are involved in the process.

The full picture
At FläktGroup, we believe that it's key for personnel involved in specifying such systems to understand precisely what it is they are assessing and buying into from the very beginning, as opposed to relying on the supplier's word. After all, in design and build projects, technical proof in the form of CFD analysis is not normally required until the construction stage.

If detailed guidance on the minimum performance standards for mechanical smoke extraction and ventilation systems was available, then the process of comparing different designs during the early stages of a project, as well as the procedure for gaining local authority approval, would be much easier.

After a decade of common use, a bank of data exists to assist in designing such systems, especially for residential buildings where one lobby is very similar to another. At FläktGroup, we have data from many projects, which details the changes to the system such as supply and extract points in relation to the stair door, building characteristics, travel distances and fire size. We can compare this to the required smoke extract rates from the fire floor to ensure smoke-free escape routes. By aggregating all of this information into a database, we have developed suggested extract rates for buildings over Urn high with up to 20 storeys.

Furthermore, in the wake of tragedies such as Grenfell, there is a growing reliance on sprinklers to protect against the spread of fire in high-rise buildings.3 However, this doesn't tackle the inherent danger that smoke poses. In fact, extensive exposure to smoke remains the primary cause of most fire-related fatalities.4 Tall buildings also have naturally longer evacuation times, making an appropriately specified mechanical smoke extraction system paramount.
If further information from previous designs supplied by other key players in the industry was available, along with local authority reports from approved projects throughout the years, a full body of evidence and knowledge could be produced to compile a set of technical standards and parameters.

This could form the basis to extend Approved Document B, which would simplify the approval process and enable specifiers and developers to choose the most suitable – not just the cheapest and poorest quality - solution. Most of all, it would maximise fire safety in a high-rise building for the benefit of occupants and support firefighting access.